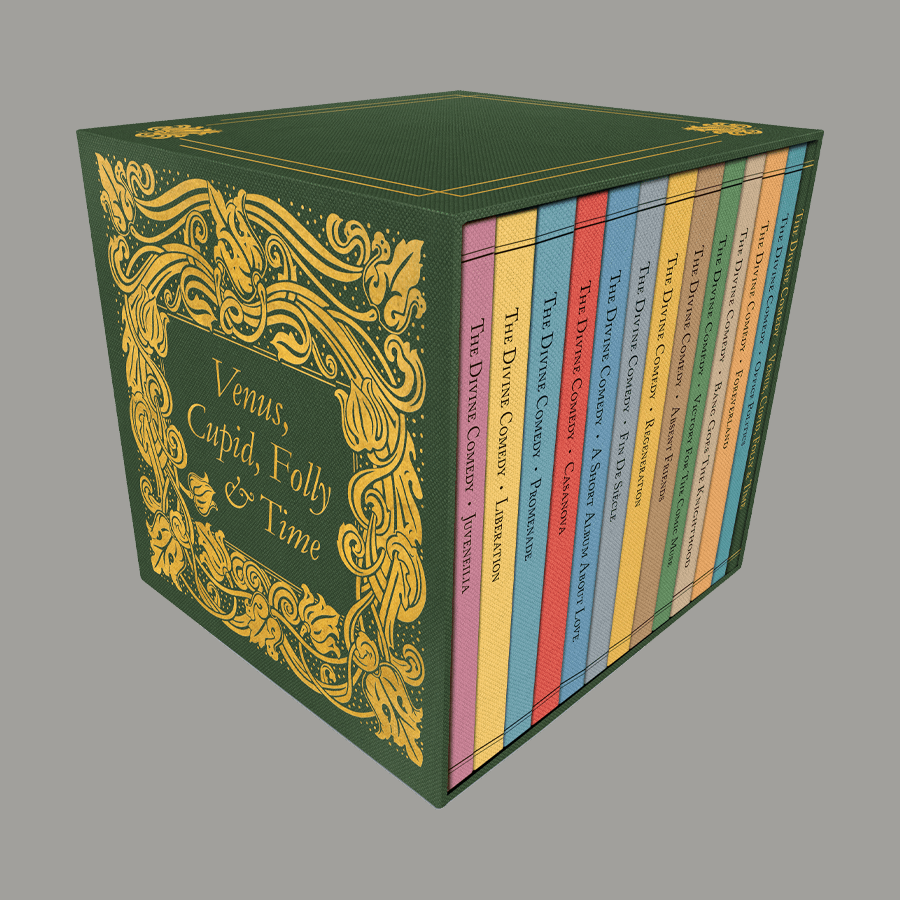 Each limited edition boxset comes with a numbered Letter From The Author signed by Neil Hannon – this is only available when buying the boxset from us.

In 1990 Neil Hannon started recording and releasing under the name The Divine Comedy. Thirty years and twelve great albums later, Hannon is rightly adjudged one of the finest singer songwriters of his generation. To celebrate, Divine Comedy Records are remastering and reissuing nine of the band's classic albums.

The limited edition twelve volume CD boxset Venus, Cupid, Folly and Time - Thirty Years of The Divine Comedy brings together all the remastered CD albums and bonus material, as well as new editions of 2016's Foreverland and 2019's Office Politics updated with bonus material and liner notes. It also features Juveneilia - a boxset exclusive 2CD compilation of early material put together by Neil from his personal archive, including recordings stretching back to as early as 1984. It contains the "lost" 1990 album Fanfare For The Comic  Muse and long out-of-print EPs Timewatch and Europop.

Included in the boxset is the book “Venus, Cupid, Folly and Time – The Lyrics” which collects together the lyrics from the 11 main albums alongside pages from Neil’s original lyric notebooks.


Each CD set consists of 2 discs: the remastered original album, with a second CD of B-sides, demos and alternate versions lovingly curated by Neil Hannon, much of which has never been heard before. The CD release of "A Short Album About Love"
comes with a DVD of “A Short Film About A Short Album About Love – a previously unreleased 50-minute film of the Shepherd's Bush Empire concert at which “Short Album..” was recorded. Each CD comes with a booklet of photos and extensive liner notes written by Neil, covering the context and inspiration behind the album and its songs.

Each CD comes packed in a slipcase featuring an illustration inspired by each album drawn by Mathieu Persan.

The nine reissued albums have been remastered from the original tapes at the legendary Abbey Road Studios by mastering engineer Frank Arkwright (Blur, The Smiths.) Overseeing the audio throughout the campaign is engineer/mixer/producer Guy Massey, whose work on the Beatles Stereo Remasters won him a Grammy Award. The iconic covers and photos for five albums have been lovingly restored by original photographer Kevin Westenberg.

The reissues will be released by Neil Hannon’s own label Divine Comedy Records on October 9th, 2020.

To mark the release, The Divine Comedy will play five nights at the Barbican in London and then later the same month, five nights at the Cite de la Musique in Paris. Performing as an eleven-piece ensemble, the band will play two albums from their catalogue in full each night. These shows will now go ahead in 2021.